The intuitive genius of the ceramic crafter Watson Nyambeni.

Born in rural Venda in the Limpopo Province in northern South Africa in 1954, Watson Nyambeni was exposed as a child to the making of traditional hand coiled pots by his mother and other women. For toys, he fashioned and sundried clay figurines of cattle and chickens. By the time of his mid-twenties, he had become part of South Africa’s migratory labour force and found work as gardener and “house boy” for a Jewish family in Orange Grove, Johannesburg. In 1981, the distinguished studio potter Digby Hoets offered him employment as studio hand and over the years groomed Watson into the indispensable studio general factotum that he remains to this day. As a teenager he joined the New Zion City Apostolic Church in Venda but in adulthood switched membership to the Ukhukanya Christian Church of which he became a church evangelist and later the pastor of a satellite congregation in Midrand, near the Hoets studio. In-between his studio duties and serving his congregation, but only when he feels inspired to do so, Nyambeni hand builds ceramic figurines and candle holders which are raku-fired. 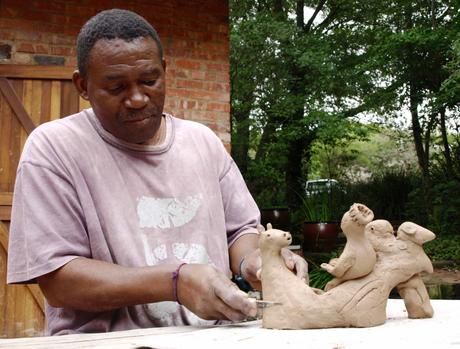 Naïve yet complex, unrefined but not crude, simultaneously incongruous and familiar… Nyambeni does not address the aesthetics of form and function either as vessel or sculpture but in his presentation of ornamental objects – both decorative and functional - he creates hitching posts for memories, meanings and values. He creates with intuitive genius.

The ornamental figurines depict animals and birds or Biblical personages such as Moses holding the tablets with the Ten Commandments (Exodus 20), Jesus praying on the Mount of Olives (Luke 22), the prophet Elijah being fed bread and meat by ravens (1 Kings 17), Jonah and the whale (Jonah 1-2), Nebuchadnezzar being punished (Daniel 4), Mary and Jesus as baby (Matthew 1, Luke 2), and others. The candle holders are structures with assemblages of different animals and birds (including giraffe, tortoise, monkey, rhino, sheep, elephant, peacock) with or without the addition of winged angels or biblical personages with randomly placed niches for candles. The principal supporting structure of the candle holders might be in the shape of a bird or an ox onto which animals, figures and angels have been mounted. The works are fashioned from either stoneware or porcelain clay and bisque-fired in an electric kiln at a temperature of 1000oC (Cone 6), after which they are either coated with slips coloured with basic metal oxides and/or glazed in a basic raku glaze. Once thoroughly dry, the glazed works are loaded in the electric kiln for a second bisque firing at 1000oC. The works are then moved to a brick-built reduction chamber lined with paper and wood in which combustion of the materials occur. By sealing the chamber, oxygen is reduced and carbon is wicked into the still porous clay body, resulting in a blackening of the clay and accentuating the crackle pattern of the glaze. (1 - 2)

A deconstructivist discussion of Nyambeni’s work must take into account his exposure to traditional Venda pottery, the influence of the Christian faith on his work, his familiarity with modern studio materials and methods, and the reception of his work in the South African ceramic art canon.

The pot-making tradition in Venda is handed down from mother to daughter. Pottery is a traditional gendered labour rather than a taboo activity for men but children of both sexes would indulge in the pastime of making clay oxen and figures. Clay pots are hand built by coiling river clay which is locally sourced. The pots are built in stages, allowing time for each stage to dry. Traditionally, the finished pots are decorated with red ochre and graphite but commercial gloss paints made their appearance on pots in the mid-twentieth century. After a thorough sun drying, the pots are pit-fired in layers of grass and wood as fuel for about six hours. The types of pots include those for keeping drinking water or traditional beer, open plates for serving food and others which has a handle or ladle for the handling and drinking of liquids. The potters also produce large water vessels in the shape of women as water carriers. Figurines (matano) of crocodiles, pythons, goats and human forms are carved from clay (and wood) for use in the pre-marital initiation rites of girls to teach values and appropriate behaviour and are kept in a secret place in the village. The contemporary potters are inventive in creating forms with non-traditional motifs that appeal to the art and tourist markets. (3 – 12)

The Ukhukanya Christian Church (UCC) is one of many small, independent churches thriving in South Africa. It was founded in Soweto in the 1990s by Bishop Elijah Ngozo and syncretises Apostolic faith with traditional African religious beliefs and in particular that of the power of ancestors to act as intercessors on behalf of humans. (13) Ukukhanya is both the Zulu and Xhosa word for “light” or its derivative meanings of “enlightenment” and “light in the darkness” (14 - 16) but Nyambeni translates ukhukanya (in its different spelling but same pronounciation as ukukhanya) as “to shine bright.” (17)

Animals feature prominent in Venda traditional religion and folklore. Nyambeni uses animal and bird figures to express associated Christian values but not necessarily those embedded in Christian usage. Christianity adopted imagery as commentary on the nature of the divinity and to illustrate the Christian way of life: birds represent human souls, ducks represent gossip, the heretic is the hyena. etc. (18) In Nyambeni’s lexicon of symbols the tortoise is the unbeliever because he withdraws from the truth, the peacock is too proud to acknowledge God, the giraffe with its feet on the ground but head in the air is confused about good and evil, and the monkey leaping about vacillates between belief and unbelief. (19) Whereas angels are traditionally associated in Christianity with serving as messengers of God, praising God or representing purity, justice and mercy (20), Nyambeni attributes a single value to the angel: peace. (21)

The symbolic and ceremonial use of candles is universal in Christianity to denote divine nature, divine presence and living in the light of faith or used as offerings of worship or simply as decoration and to create ambience. (22) A seven-branched candelabra in the style of the Judaic faith’s menorah is displayed at each end of the altar in the UCC church. This does not appear to be a reference to the menorah and its Old Testament symbolism but was adopted as a form of candelabra which the UCC imbued with its own symbolic values. The UCC also does not appear to have a prescriptive use of the candelabra in its ritual. Nyambeni uses candles in various colours with emphasis on blue and white for celebratory (wedding) and commemorative (funeral) services. (23)

Working in Hoets’s studio, Nyambeni is responsible for the manufacture of clay, the preparation of slips and glazes, the packing and firing of kilns and assists Hoets with glazing his pots and loading them into the kiln. Over the years he has developed considerable knowledge and expertise of all aspects of studio ceramics. (24)

Only a single work of Nyambeni has been taken up in a public South African ceramics collection namely the Ceramics Southern Africa’s Corobrik Collection housed at the Pretoria Art Gallery. Collection acquisition # 220 is Nyambeni’s Candelabra, measuring 32 cm high and 42 cm in width and was acquired at the Ultra-Furn Gauteng Regional Ceramic Exhibition during August 2011. (25 - 26) In her review of the exhibition, Runette Kruger mentioned Nyambeni’s work as “worthy of attention” and resembling “… the works of so-called ‘outsider artists’ such as [the sculptor] Helen Martins and [the woodcarver] Jackson Hlungwane, who created works in a highly personal style based on their religious beliefs and visions”. (27) Nyambeni’s works have in fact little stylistic resemblance to those of Hlungwane or Martins and at best share meanings derived from Christianity. Jean Dubuffet created the term art brut to denote art created outside of the established art scene as “fantastic, raw, visionary art created by individuals often maladjusted, with no art training, who work outside the mainstream of the art world.” (28) The English synonym of “outsider art” was coined by the British art critic Roger Cardinal and has a broader meaning to include self-taught or naïve art makers, with little or no contact with the mainstream art world or art institutions. (29) It can be argued that Nyambeni falls outside of the parameters of outsider art as he has extensive exposure to ceramic art production (such as the use of glazes which is not a traditional Venda material and technique) by Hoets and Hoets’s accomplished students. He does, however, fall within the parameters of art brut but only if measured against Dubuffet’s criteria of the “fantastic”, “raw”, and “visionary”.

Collectors have little exposure to Nyambeni’s work because these are not promoted in galleries and he does not regularly submit work for Ceramics Southern Africa’s regional exhibitions. They can be seen displayed outside Hoets’s studio and he adds works on an infrequent basis. He might therefore be considered a “minor artist” when compared to the likes of prominent Black potters and ceramists such as Nic Sithole, Clive Sithole, Andile Dyalvane, Meshack Masuku, Nesta Nala, Henriette Ngaka, and Austin Hleza or the potters and ceramists of the collectives of Ardmore Ceramic Art and the ELC Art and Crafts Centre of Rorke’s Drift. On the other hand, Nyambeni does not aspire at all to recognition as an artist or the sale of “art”, treating interest in his work in a polite manner but of little relevance. This does not diminish Nyambeni’s work of which the stature cannot be made dependent on popular or collector appeal and “official” recognition and which would be out of place (as in one dealer’s description of collectable, evolutionary African pottery) “over a fancy mantle in a luxury hotel as well tucked in bustling tourist shops.”(30)

I propose that we read Nyambeni’s work as a three-dimensional ceramic biography which encompasses his Venda culture, urbanisation, exposure to a ceramic studio environment and working ceramists, and for the specific purpose of expressing his Christian belief (the doctrine and liturgy of the Ukhukanya Christian Church). His works might speak in biblical language but there is a distinct and lingering link with the traditional Venda matano initiation figures. (31) Also of significance is that Nyambeni’s work is illustrative of the de-genderisation in Venda crafts which has seen women adopting the traditional male domain of woodcarving just as Nyambeni has ventured into the women’s domain of clay work. (32)

We will make ourselves guilty of canonical prejudice and mischief if we deign to search for a distinct “Africaness” or something “Africanesque” in his work in order to make it fit our perceptions of what is “African”, “other” or “similar” or “hybrid”. At the level of aesthetics, we can celebrate his spontaneity of form and finish, and his unrehearsed rendering of multiple and plastic readings of symbolism, metaphor and allegory. And acknowledge his intuitive genius.