A Head for Heads | The Sculptures in Ceramics of Monica van den Berg.

In what is today modern southern Nigeria, the Benin culture flourished in the 19th century The Oba, the monarch, was revered as a divine king with temporal authority and spiritual power and he had custody of the royal relics: brass castings, ivory carvings and coral. Amongst the works in cast brass were the sculptural altar heads which each new Oba commissioned to commemorate his predecessor. The head, according to the Benin people, represented the center of thought, judgment, hearing, sight, speech, and life and in its cast form, guaranteed prosperity and health to the whole of society. Some of the sculptural heads featured scarification marks or furrows to receive sacrificial blood and some had openings at the top into which carved ivory tusks were inserted as further symbols of the Oba’s wealth and authority but also as a pathway of communication between the living Oba and the ancestral spirits. (1 to 4)

The Benin heads are a prime source of inspiration for the fired clay heads of the South African ceramic sculptor Monica van den Berg. Their forms and associated symbolism are translated into Van den Berg’s highly stylised and at times abstract sculptural works: anonymous rather than representational portraits of man, inviting contemplation of the psyche of man but also of the socio-cultural construct of man. They speak in a language of form and symbol, not to commemorate man but to invoke what makes man. They are, or have the appearance of being monumental but not monument. The lack of defined and detailed facial features (sometimes masked, obscured, hinted at or erased) are juxtaposed with dramatic line, contour and surface. Gapes, holes and cracks connect surface with subsurface. It is the absence of detail, the blank areas of surface and the voids in the surface that allow the viewer to “fill in the spaces” and invite a co-construction and meaning of man and humanity. 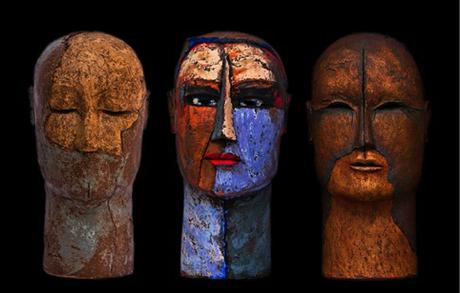 Van den Berg was trained in sculpting with clay for casting in bronze by Amalie von Maltitz the doyenne of South African ceramic sculpture, and continue to produce abstract forms in those media. Her search to expand her skills in creating form and surface treatment, nudged her towards ceramics and under the instruction of Wendy Goldblatt and mentorship of John Shirley, she mastered techniques and materials that ad depth (as opposed to embellishment) to the form. Form remains her critical consideration as foundation for surface expression of texture and colour.

For some works, Van den Berg builds heads from a basic structure created with a two-part press mould to which she ads or subtracts surfaces. At the leather-hard stage of either heavily-grogged stoneware clay or basalt clay, the surface is treated by hand and tool. With layering, weaving, pinching, scratching and incising, the original press-moulded form is altered and directed away from what otherwise would have been a replicated stereotype: particularised rather than individualised and for affect rather than effect. In the earlier works, only a red oxide glaze was used. She is now exploring other colour glazes over an oxide under-glaze which are rubbed prior to firing. Colour is mostly muted and suggested as opposed to applied in a painterly manner, and untreated surface areas will coax the clay to reveal its own hues in the kiln.

The heads are not necessarily preconceived for form and content. The process of creating could be a slowly evolving event lasting up to four weeks in which the material as much as the sculptor, guides the evolution of clay to sculpture. Van den Berg says that it is only after a work has been completed, that she can read intuitive thought and process in it. Heads are bisque-fired, glazed and then fired in an electric kiln at 1100oC for basalt clay and 1200oC for stoneware clay. If the firing was not perfect, Van den Berg will not re-glaze but rather abandon the work. The long process to complete a work means that Van den Berg can not lapse into production-line output which she in any case does not aspire to achieve.

Wilma Cruise, Eugene Hӧn, Hylton Nel, Nicolene Swanepoel, Elizabeth Burkhalter and several other South Africans evolved from ceramics to ceramic sculptures and straddle the art worlds of both ceramics and sculpture. Van den Berg is unambiguous about what she is: a sculptor working with ceramic materials and processes. Cruise, an artist and writer, posed the challenging question whether clay as the common material erases the boundaries between ceramic vessel and ceramic sculpture or whether we juxtapose ceramic sculpture and ceramic vessel because we lack/confuse critical language to see the sameness in the difference (5). For the ceramist Conor Wilson it boils down to the issue whether sculpture is an idea-material discipline and ceramics is a material-idea discipline and as which of the two a work is presented to the audience (6). The challenge for Van den Berg who has participated in Ceramics Southern Africa’s regional and national exhibitions, will be to position her work as either ceramic-sculpture or sculptural-ceramic and compete for recognition and discourse thereof… or simply shrug off such taxonomies and - until such time as the sameness of the difference is resolved - hover on the ceramic horizon.

Cruise, Wilma. 2012. “Not all Cows are Piebald: Ceramics and Sculpture in South Africa.” In Interpreting Ceramics, Issue 14, 2012. (O) Accessed 19 November 2013. Available at http://www.interpretingceramics.com/issue014/articles/07.htm

Stefan, Olga. 2013. “Fire It Up: Ceramic as Material in Contemporary Sculpture.” In Journal of Modern Craft, July 2013. (O) Accessed 28 January 2014. Available at http://journalofmoderncraft.com/review/fire-it-up-ceramic-as-material-in-contemporary-sculpture-essay