Design for Slow Living with reference to the ceramics of Esra Bosch.

Followers of the Slow Movement believe that we suffer from ‘time poverty’ (1) and that in the modern-day rush, we lack the experience of the experience. The concept of Slow Living developed alongside the Slow Movement but puts the emphasis on authenticity in lifestyle. (2) By lumping them together, we could state that the Slow Movement and Slow Living address the ‘poverty of the aesthetics of the everyday’, the former to create experiential spaces and the latter to discover experiential things. This has a kind of analogy in the writings about art and culture of Susan Sontag where she criticised how content had come to dominate over form in art. Sontag made a plea that we “cut back content so that we can see the thing at all.” (3) But does the “thing” indeed have content at all or does content, as the French theorist Roland Gérard Barthes argued, arise only from the interaction between object and receiver? (4) Enter the American aestheticist Yuriko Saito who proposes a midway approach: that we skip hunting for the aesthetic kick in an object because the aesthetics already reside in what it is and flow from how we experience (look, own, use) it. (5)

Slow Living is not about dematerialising the world but rather about populating it with material – utilitarian and decorative – that invite objective (it is what it is), subjective (it is what I think it is) and relational (it is because it is given social meaning) experience. Such objects are multivalent, meaning that their experience is not prescribed by either tradition or convention but by choice of interpretation and assimilation in a personal/communal space.

And that is what the ceramics of Esra Bosch are all about… functional forms invested with complex agency to ease us into Slow Living.

Esra is the daughter of the acclaimed South African potter Esias Bosch (1923 - 2010), and sister to both the accomplished ceramist Anton Bosch and author and translator Andre Eva Bosch. In 1985, some years after qualifying as a veterinary nurse, she joined the father and son team as a full-time ceramist at their studio in White River in Mpumalanga Province and now heads the expansive studio with its workshops and galleries. Esra does not have formal art training and this was much to Esias’ delight because he believed that an academic grounding in art had “a lot of lah-di-dah about it all.” (6, 7) Her focus has been on functional and decorative ceramics including platters of one metre in length, large bowls, vessels and vases, oil lamps, cupboard knobs, and tiles.

Functional ceramics, like any other craft, is what the Canadian ceramist and writer Paul Mathieu describes as “an archival practise”:
“inasmuch as they preserve and perpetuate at times obsolete and possibly irrelevant techniques and processes in the making of objects, which have lost their original relevancy in the contemporary world.” (8)
For ‘objects’, read crafted ‘vessels’ whether those be cups, jugs, plates, bowls, pots and whatever else which in their de-personalised, mass-produced forms are stripped of so much interpretational value that they can merely do duty as convenience containers. A bowl will always be a bowl because of its functionality but a bowl can be more than a mere bowl when it carries a signature of conscious making. Esra’s ceramics are ‘archival’ in the sense that she perpetuates the ethos of Esias’s work: frugal form but generous physical and supra-physical texture.

For the greater part, Esra’s work is handmoulded using her own press moulds, drape moulds, and two and three piece moulds. Footrings and pedestals are either extruded and placed onto the vessels or are spun on the wheel. The freeform dishes assume soft, flowing shapes with or without lugs or handles. Her white stoneware claybody fired at 1200oC, is used for all her claywork, other than the making of tiles. Her technique is impromptu, loose and expedited so that the works are not laboured into form. It is not her intent to produce exact, replicated forms. Irregularities in shape and additions such as feet and pedestal bases, individualise works of the same form. The small, slabbed dishes, in particular attest to her disregard of sameness. Such liberated forms speak of a kinaesthetic experience in the making which flows from a familiarity with the material and, in the description of the craft culture historian M. Anna Fariello, a “privileged relationship with … material.” (9) Howard Risatii, the American art and craft theoretician, took this a step further by explaining that in giving shape to an object, the hand is a direct extension of the mind of the maker and as such creates a resonance between mind, body and object. (10) This transcends the ergonomics (which in its strict definition addresses comfortable and effective usage) of the object in service of the user, and addresses the object in a state of affinity with its user. Esra’s works bear witness that it is not all about the ‘what’ and ‘why’, but about the ‘how’ of the object: how it was conceived and made, how it addresses both tradition and modern convention, how the ethos of the maker is embedded in the form and decoration, and how it permits the reading of its semiotics by viewers/owners/users in widely divergent ways. There is nothing happenchance about any of her works nor are any works deliberately engineered for effect. It is rather the case that Esra telescopes a lifetime of ethical making into every object. 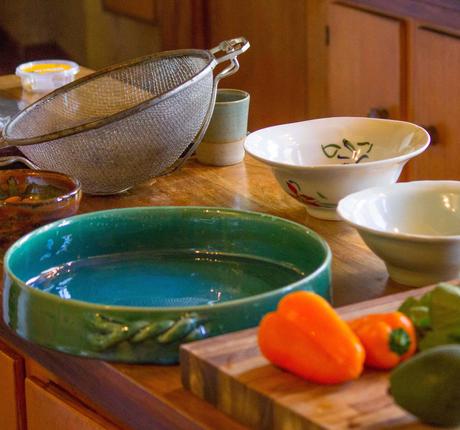 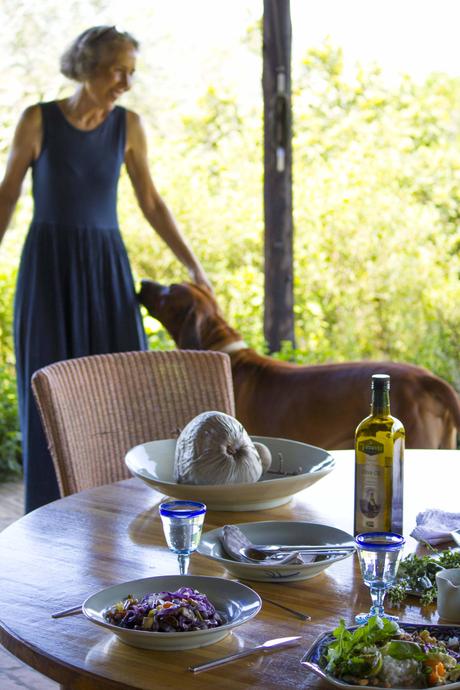 Many of the painterly repetitive decorative elements (impressionist or abstracted birds, flowers, fruits, landscapes) show some relation to those of Esias but they are derived rather than copied: it is inevitable that having shared the same studio space for some four decades under the continuous mentorship of her father, Esra’s work would reveal Esias’s fingerprints. Esra has a basic range of feldspathic glazes: transparent, mock celadon, copper–green, white, and crackle bone ash. Hues of cobalt blue dominate in her brushed and stencilled decorations but her palette also shows a wide range of other sharp and subdued colours. Brushwork designs are often reduced to slip-trailed decoration which subtly emerge from surfaces, relying on light and shadow or touch to reveal them.

Functional objects are more than physical spaces. They are experiences, says Mathieu, of spaces outside of time. (11) His argument goes that these objects have a conceptual constancy (the bowl can be innovated but not re-invented) which can not be challenged in “a world where the impermanent, ephemeral, virtual, transitory and instantly obsolete are the norm.” (12) Slow Living ceramics by themselves do not have the agency to make time slow down but they can trigger a disruption in patterns of time by compelling us to pause and consider the object, and reflect on it and about it.

Esra’s functional ceramics are not home essentials. They are acquired as objects of choice to facilitate and celebrate Slow Living… as synapses between what is real and what is reality.