Beyond artefact. The work of the potter Elza Sullivan.

Design and decoration might elevate the ordinary to the extraordinary but if a functional object - utilitarian or decorative - commands recognition only because of its difference, it will be experiential rather than experience. Craft can not be made to be art by merely rendering the familiar as strange because its ethics and aesthetics would reflect off rather than emanate from within the object. However, when the object commands reception on its own terms even as it stands in service of our expectations, then we may consider it to be art-craft.

The pot is not just a pot. It is the end result of a process of creation in which the potter engaged in dialogue with design, material, technique, process, history, tradition, ergonomics, spatial relationship, experience and exploration. The functional pot can transcend its function, says the British studio potter Walter Keeler. (1) The Australian studio potter Shannon Garson views the functional pot as the antithesis of the “gradual and insidious ‘de-texturization’ of the home”. (2) And the British art historian Tanya Harrod suggests that “ceramics have, as participants in the fluctuating relationship between art, craft and the home … carried all kinds of high and low art references into the domestic space.” (3)

For the South African potter, Elza Sullivan, the issue is a simple one: functional ware invites an intimate engagement between the object and its owner/user in everyday life and everyday surrounds. Working in the idiom rather than the continuum of the Anglo-Oriental school, Sullivan produced high-temperature, reduction-fired, functional and decorative stoneware over a period of four decades until her retirement in 2013.

Sullivan’s dictum is that the more you work at it, the better you would get at it and this applies specifically to forms in functional ware. Repetitive work, she says, allows the potter to grow in technique and technique lies at the root of developing an own style: “You have to know where you fit into the process.” Technique is essential but must not be allowed to rigidly prescribe form which is in tension with expression. In essence, pottery is about focussing the macrocosmic into the microcosmic (4) and the resultant “aboutness” of the pot – even in the plainest of form and decoration - is also the “aboutness” of the potter and of the eventual owner/user. Functional work in repetitive editions of form and decoration did not dominate Sullivan’s output. In between she produced works that merged functional artefact with objet d’art.

In the process of pottery, writes the ceramist and ceramics art historian Jeffrey Jones, a particular sequence of actions more so than a set of directions or fixed intentions, would produce the “unique, unrepeatable artefact”. (5) That translates into intuitive throwing and decorating, honed through repetitive work, to produce a signature piece that carries, says Jones, the imprint of both the individual potter and the individual event. Or, in the description of the Australian craft maker Peter Hughes: the collapsing of the distinction between object and subject. (6) The American ceramist James Trilling argues that pottery is not the image of material and process but the consequence of conscious as well as intuitive control of material and process. (7) All of this contest the formalist consideration of pottery which, says Trilling, finds “the very idea of technical problems and solutions … somehow an embarrassment to the finished work …” (8)

The options of basic form for functional pottery are limited: cups, saucers, jugs, plates, bowls, jars, platters, dishes, mugs, goblets, decanters, bottles, vases, pots and a few more. The easy way out to individualise such ware, is to dress up form with decorative work. That would not suffice for Sullivan who is adamant that if a pot is not well made, it can not be made to be beautiful. Her work echoes the thinking of Trilling that “functional form in its simplest, most austere embodiment is also the beautiful form.” (9) Irrespective of how basic or evolved Sullivan’s forms are, each piece must have as foundation all the hallmarks of good design for good use.

In the early 1970’s, Sullivan and her husband John (who passed away in 2013) were resident in the town of Newcastle in the province of Kwa-ZuluNatal. John, a mechanical engineer, was assigned to work in Pretoria for one year and Sullivan accompanied him. In that time she was introduced to studio potteries and came to know the studio potter and teacher Minette Schuiling. The attraction to pottery was instantaneous and when the Sullivans returned to their home in 1972, Sullivan acquired a potter’s wheel and built a reduction kiln using illuminating paraffin as fuel. John tried to check Sullivan’s enthusiasm by cautioning her that she should “never think you can make money out of this”. With no foundation knowledge or experience other than what she could glean from books and magazines and by attending every available pottery workshop, Sullivan commenced to create pots. 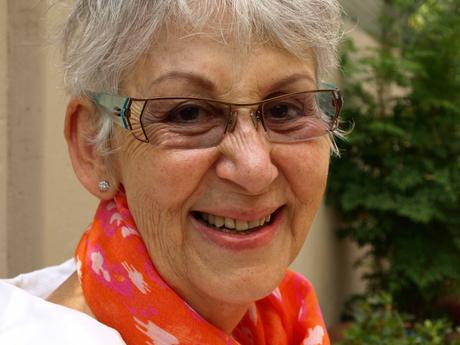 She recalls her first attempt at throwing a casserole dish which was so heavy, it could barely be lifted. During the second firing of the kiln which “angrily belched smoke and fire from the chimney”, the kiln floor collapsed. When things went wrong, as predictably it would, Sullivan read some more and attended more workshops and John tapped into his circle of engineering colleagues, to find and create solutions. It all started to come together and Sullivan started producing pottery which the local community took a keen interest in. The Sullivans moved to Pretoria in 1982 and at their home in the suburb of Lynnwood Glenn, John built a gas-fired reduction kiln. That kiln in which she fired to cone 10, 1305oC, produced in excess of 1 500 loads. Sullivan resumed production on much bigger scale and started teaching pottery. Living and working in Pretoria, brought her in close contact with the much acclaimed potters Tim Morris (1941 – 1990), Esias Bosch (1923 - 2010), Chris Green, Chris Patton, Digby Hoets, Neville Burde and many others. Any opportunity to attend a workshop was pursued and especially those presented by Morris who was famed for his generous sharing of knowledge, his sharp wit and very English sense of humour: “He said I must make thin spouts for jugs and pitchers so that they would break easy and then the buyers will come back to buy new pots… or to throw vases with very slender necks so that buyers would not be able to see how messy the pots were on the inside.”

Her numerous solo and group exhibitions, the many awards won at the regional and national competitions of Ceramics Southern Africa (CSA), the inclusion of her work in South African and foreign collections and being named a fellow of CSA, are endorsements of the excellence of Sullivan’s craft. She is appreciative of the honours but dismissive of her status as a leading studio potter: “I am a craftswoman, not an artist… I wasn’t born with talent but developed a skill… I just wanted to get better at pottery… to make a good pot.”