The landscape as ceramic gesture: the vessels of Drury Brandt.

“I have always believed that perfection doesn’t exist in anything, and is an illusion. For me, perfect is sterile, soulless…”
Drury Brandt (1)

Way back in 1913, the British art critic Clive Bell posed this question: “Who has not, once at least in his life, had a sudden vision of landscape as pure form?” (2) He argued that when we dismiss the individual values of the objects which together constitute the landscape, we can merely “feel the landscape artistically.” However, wrote Bell, we achieve “a peculiar, aesthetic state of mind” (which he also described as “ecstasy”) when we acknowledge the parts of a landscape as pure forms within the greater pure form of the landscape. Bell was a supporter of the theory that significant form as a combination of lines and colours with the capacity to invoke “good states of mind”, dictated whether something could be considered a work of art. In other words, everything that makes art is contained within the artwork itself. 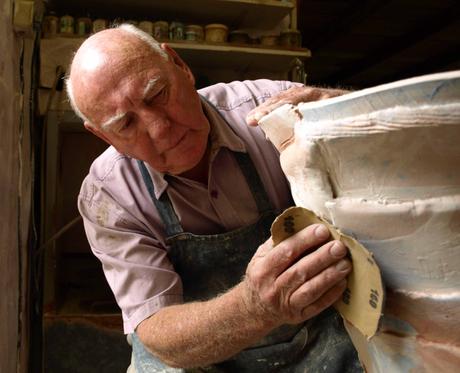 Whilst formalism celebrates the form, it dismisses the form-in-context which in the case of the South African ceramist Drury Brandt, is centred in his experience of nature, the life values he extrapolates from nature, his range of materials and gestural technique. Brandt creates monolithic, landscape-textured vessels which suggest rather than imitate or copy his observations of the landscapes and rockscapes of South Africa’s mountain ranges in the Karoo, Magaliesberg, Drakensberg, Cederberg and Swartberg. The vessels bear fissures, cracks, folds, ridges, scratches, furrows, rough edges, stressed surfaces, overlapping planes, crevices, erosion and grain which speak of the force of creation. They do not have elegantly defined or balanced form but jut, lean, expand, contract and abruptly terminate. Creation as a process of both growth, ageing, weathering and decay, is compressed and caught in time and space. Simply put, the vessels are dramatic and expressive, and being for the most part non-utilitarian, compel the viewer to consider whether they are landscaped objects – especially taking into consideration that they are often elevated off the ground on feet - or landscapes per se. Nature invites reverie and even aesthetic engagement, (3) or rather, aisthesis which is the engagement and alertness of the total sum of our senses (4) but Brandt’s vessels invite noesis which is the intentional act of consciousness (5) and in Brandt’s case, of objects in nature and specifically what constitutes and is expressed as form and surface.

If we apply the quick-to-hand but bland label of “organic” to Brandt’s works, it can only be because they have irregular shapes based on natural forms and patterns. (6) It is not “environmental art” which engages the natural world in debates of social, economic and political ecology. (7) It does not fit into the category of contemporary “landscape art” (not to be confused with art of the landscape) because it is not purposefully created to embellish or accentuate external environments. And they most certainly ain’t garden pots. On the other hand, they do look good in garden settings, do merge with natural forms and do reflect Brandt’s musings on environmental issues (waste and decay) and social issues (a lack of respect). (8)

Brandt had no formal schooling in ceramics but was lured by it, at the age of 51 years, as a therapy to escape the stress of his professional career. Having shown some talent in drawing and “making things” (9) in primary school, he was later enrolled for carpentry in a trades school where he “learned very little of the things I was supposed to, and much of the things that I was not.” (10) He was later trained as a designer-draughtsman for the engineering of steel-smelting furnaces but later established himself as a building contractor. His intrigue with the environment started at an early age. As a child he had to dig and prepare garden beds and from the subsurface he hauled fragments of tableware, broken and often intact glass bottles: “… and [I] can remember wondering about the journeys undergone by these items, what they had witnessed had they had organic life, and the joy or sorrow of loss by their owners when broken and discarded”. (11) Brandt enrolled in 1987 for ceramic classes under Digby Hoets under whom he studied until 1993. In-between and afterwards he attended workshops in South Africa, Wales and England by the British ceramists John Gibson, John Maltby, David McDowell and Richard Phetean. He also attended the Ceramic Millennium Conference in Amsterdam in 2000 where Brandt was exposed to new approaches to the modern history, scholarship and criticism of ceramics. In 2001 he was the resident artist at the Tallaght Community Arts Centre on the outskirts of Dublin, Ireland. His lack of formal qualification in ceramics is of no concern to Brandt who, for his own needs and aspirations, places greater value on a hands-on study of the medium. (12) For form, Brandt draws inspiration from the ceramic work of Hans Coper, Peter Voulkos, Gordon Baldwin, Colin Pearson, Alison Britton, Shiro Tsujumura and Caudi Cassanovis. For illustration, he looks at Robert Motherwell, Serge Poliakoff, Paul Jackson Pollock, Antonio Tàpies and Alberto Burri.

From the very start, Brandt excelled at hand-building. When he did explore work on the wheel, the thrown pieces were rather pedestrian. (13) He re-focussed on slabbing, “breaking every rule in the book”, (14) avoiding anything that is “too slick … stylised … boring and too predictable” and opted for works “when on being viewed from different perspectives surprises, draws one in and intrigues.” (15) The latter applies to both his forms and textures. For Brandt, texture is to be seen and felt and allowed to invoke associations. He creates texture by stressing his clay, adding clay in layers, incorporating clay shavings, rolling clay over found surfaces, by not trimming edges, peeling off surfaces, thumbing on additional clay and applying markings. Coloured slip glazes are sometimes applied to the slabbed wet clay prior to construction, manganese and iron oxides are applied to cracks to accentuate them, decorative work is painterly but in a loose fashion, little is preconceived and much appears to be intuitive. He “embrace[s] the flaws and cracks that evolve through the various stages of making and firing” (16) because “arbitrary effects … add to the spontaneity and life in a piece”(17) but rejects faults. A vessel with parts that have cracked off during the bisque-firing is sometimes valorised, gaining additional character rather than emerging in a completely new guise.

The ceramist Lynette Morris Hale wrote a critique of Brandt that capture all that it is about:
“His work is spontaneous … [but] takes into consideration all the formal elements of art i.e. line, shape, colour and texture. … I could hear the voice of the clay – it was allowed to flop, it was allowed to crack, it slouched, it wobbled, it tore, it twisted and finally it allowed itself to be decorated by dribbled and splattered glazes, under glazes and oxides. … [but] what he allows to happen to his work is the result of conscious decisions.” (18)
Wilma Cruise, artist and writer, commented that:
“[Brandt’s] crude beauty … does not mean freedom from constraint. The correct balance of freedom of form and surface is even more elusive here than in works where a continuous refinement of form is permissible. Drury Brandt is aware of these boundaries: he maintains that freedom of expression takes place within the confines of a ‘tradition of Informality’.” (19)

Within a year of studying under Hoets, Brandt started winning recognition for his work. His work was accepted in the New Signatures section at a regional exhibition of the Association of Potters of South Africa (APSA) in 1989 and given highly commended awards and first prizes for sculptural and handwork entries at subsequent APSA events. Brandt is represented in the Oliewenhuis Art Museum in Bloemfontein, the Sandton Art Gallery Collection, the William Humphreys Art Gallery in Kimberley and the Corobrik National Ceramic Collection in the Pretoria Art Museum as well as in private collections in South Africa and abroad.

Earlier writers about Brandt saw the appeal of his work in defying or at least ignoring, the Anglo-Oriental style of ceramics. (20, 21) There is most certainly nothing in his work that evokes the forms and surfaces of the Anglo-Orientalists but he is true to the tenets of that school’s respect of material and process. If his work appeared as “displaced” amongst those of other South African ceramists at the turn of the century as the ceramist Nicolene Swanepoel experienced it, (22) it would not have been for the shock value of its tears and twists but because of its sheer and in-your-face difference. His works then, as they do now, do not comfortably share spaces with functional ware and decorative pieces specifically because the viewer has to deconstruct and reassemble Brandt’s works to arrive at an understanding of the individual as well as the enmeshed layers of meaning.

Just as aesthetic engagement (as opposed to casual aesthetic appreciation) with nature requires the subject to stand within and not opposed to the object, so can Brandt’s works only be received when the distance between the subject and the object, as well as the distance between the landscaped object and the landscape, is reduced. A Brandt work cannot be looked at from a distance… it has to be approached and explored by touch. It is the tactile experience of the ridges, edges, crevices, planes and grain of his work, alongside his visual vocabulary, that affirms Brandt as a master at guiding whatever random occurrences there are in his material and technique, to a perfect conclusion in an imperfect form.