Objects of consciousness and experience | The (very) large pots of Digby Hoets.

In 1987, the Johannesburg Art Gallery (JAG) introduced extensions to the building that was originally designed by Sir Edward Luytens and opened in 1915. The design of the new semi-circular north façade and galleries was sufficiently impressive to be awarded the South African Institute of Architects’ Award of Merit. On completion of the upgrade project, the gallery management surveyed the enhanced architectural landscape and found it needed something to ‘soften’ the relatively stark new architectural space and link it with the original, classical building and with the gardens which were now more visible. Using funds from its furniture budget, JAG acquired around 30 very large reduction-fired stoneware pots by the South African potter Digby Hoets - all of them as ornamentation rather than as acquisitions for the permanent art collection. (1)

However, there is a clear distinction between the object as decoration and the object as ornamentation. Ornamentation goes beyond being ornament in the sense that despite the object being portable, it unifies rather than shares, architectural space. Jonathan Massey, architect and historian at Syracuse University, in essence describes this as a “meaningful elaboration” of architecture (2) and not an afterthought of architecture.

A pot is not merely matter energised into form, or in the case of Hoets, created as a large form. Nor is a pot the mere end result of material and process: a pot is created in the image of its maker (who gives it meaning) and a pot has the capacity to enter into a relationship with its receiver (by inviting other meaning) within the environment in which it achieves its being. Potters don’t make pots simply because they are good at manipulating material and guiding process and have some flair for design. They make pots as an expression of their personal ethics and aesthetics. Ethics are not just about doing the right thing but doing right by the thing: to make a good pot in terms of durability, function, ergonomics, and similar attributes. And aesthetics is not just about the beauty of a pot but what it is about a pot that makes it beautiful, i.e. decisions which are influenced by personal and social affective response (experience via the senses) and guided by cognitive response (reasoning about values and meanings).

Hoets’ pots are pots with ethics. The pots are invested with far too much experience and skill to be “happenings”. Hoets has been involved with clay since 1972 when he attended weekly pottery classes. In the following year he started teaching wheelwork and by 1976 he had built his first high-temperature reduction-fired studio kiln. His earlier works were functional pieces which, with Hoets’ preference for clean and crisp forms and decorations, made them distinctive within the genre. As a self-taught potter he meticulously recorded details of material, design, decoration, and firing which guided him into evolving his preferred processes and forms. For process, he creates a base on the wheel to which he adds coiled sections over a period of days, finishing the pot with the addition of rims and for some, lugs and handles. The pots are green-glazed and may include having slips poured over and combed through when still wet to provide texture. The production is strategised but not mechanised and there is no mass output. In an average year, he produces at most 144 pieces. Hoets follows routine but not formula, and that permits him to coax a slow evolution of form and decoration by means of the discipline of repetitive throwing, decorating and firing. The discovery of a distinctive subtlety, as opposed to a purposeful invention of variance, will steer Hoets on a new course.

Hoets’ pots do not submit to the vagaries of ceramic fashions and are not agonised reflections on ceramic debate. They are not presented as vessels, do not deliver social commentary, are not deconstructions of convention and are not new frontier designs. That does not mean that he merely plods on, producing staid pots. All that is the same-old-same, is that they are big pots. Such restraint can only be exercised by a potter who is in complete control of making and superbly confident that his pots have an essence that does not require to be teased onto the surface by means of fanciful decorative work. Where he does resort to decorative features, Hoets restricts himself to simple surface treatments and a limited palette of earthy-coloured glazes that integrate with the form. Nothing is imposed onto the form. Nothing is superfluous. And nothing clamors for attention. The pots have a wholeness derived from parts which can only exist as a whole.

Hoets’ pots are pots with aesthetics. In essence the Gestalt theory is concerned with the relationship between the parts and the whole of a composition as well as our behaviour towards it by means of visual reception and psychological perception. In an essay, the Canadian ceramist and writer Paul Mathieu wrote about ceramics as actually being “about the relationship between a form and a surface” (3) coming together and defining space in specific ways. That could be translated as a pot being a singular space within a physical and metaphysical space. Hoets states that he “enjoy(s) making groups of large pots whose purpose is to enhance, enrich, vitalise and add character … to suit the space and to integrate…”. (4) In that single sentence we read that Hoets’ pots are not objects to fill or punctuate spaces but are objects of consciousness and experience in a smooth continuity of space.

The aesthetics of art and architecture deal with the values of the nature, function, purpose and ontology of the object: what makes it good, beautiful, perfect, useful, understandable, balanced, appropriate, relevant, etc. but also how and why it fits into the human experience. In Aristotelian terms, a pot’s aesthetics is “the being of being” or beyond being an inert material object. Different people will receive Hoets’ pots differently and measure form, surface, stature, usage and meaning by their own standards and perspectives. They might or might not recognise that though Hoets’ pots have assumed value and meaning as ornamentation, the pots remain fully functional with function as historical, social and cultural meaning.

As architectural ornamentation, Hoets’ pots speak of design values of simplicity, generosity and balance. They sensitise the receiver to the pot as an experience of the environment rather than as an object in the environment. And they communicate the idea of the pot as an architected container of uncontained space. 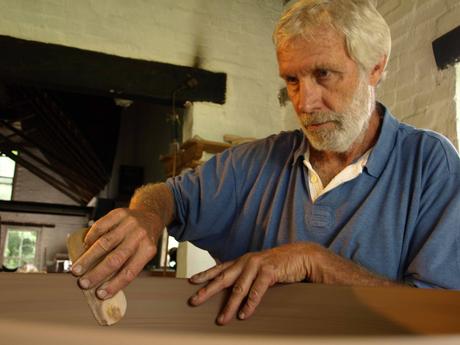